This year our flagship publication, DJ Mag UK, remains at the forefront of dance music, with a focus on established and up-and-coming underground talent, we delve into weighty artist features and the latest club, technology and festival breaking news. Plus upfront music reviews across genres from techno to grime and everything in between.

Our April edition sees in-depth chats with cover star Dax J, as well as Lena Willikens and Blocks & Escher. We also reveal the new world’s No. 1 club in the results of our Top 100 Clubs poll, investigate the unstoppable influence of EBM and chat to acclaimed acid house novelist Irvine Welsh. Shining a light on fresh talent for 2018, we also reveal Jamz Supernova, Last Japan, Terr, Charles Green and Sully’s latest killer ‘Soundboy Don’t Push Your Luck’ in our Comin’ Up section.

It’s available across the UK at all good newsagents and magazine outlets right now — here’s 10 reasons why you should grab yourself a copy sharpish...

*Like what you see? Stay up to date with our Ibiza, Croatia and USA editions by subscribing to DJ Mag here. 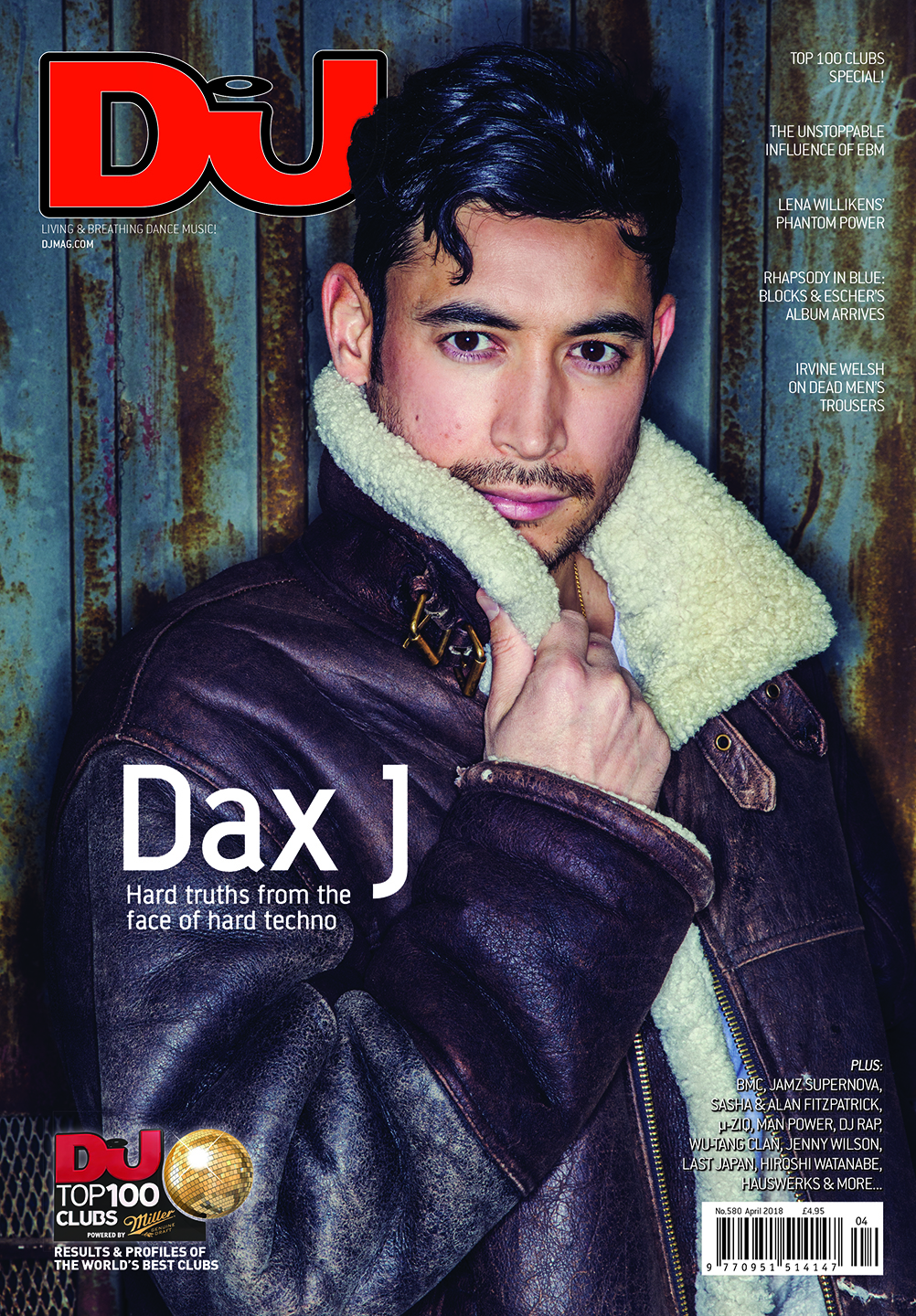 Dax J is on the cover

We hook up with the underground techno face in his adopted home city of Berlin to talk about his history in music, his second album 'Offending Public Morality', and that incident in Tunisia when he dropped a track with an Islamic call to prayer sample...

Over half a million of you voted for your favourite nitespots across the globe. Here, we profile the 100 finest, most popular cightclubs on Earth.

EBM, not to be confused with EDM, has been simmering on the underground in recent years, and now DJs including Nina Kraviz and Helena Hauff are utilising the sound – alongside other music prefacing techno like electro – in their sets. Subsequently, the '80s movement largely swept away by acid house at the turn of the '90s is now back in full force. DJ Mag investigates the industrial dancefloor clatter.

We talk to German DJ/producer Lena Willikens about her leftfield approaches to electronic music, and her ghostly muse...

We chat to acclaimed acid house novelist Irvine Welsh about his new — and last — book in the Trainspotting series, in which Renton becomes a DJ manager who reads DJ magazine.

These two heavyweights delve into the processes behind their latest collaboration.

The disco evengelist fills us in on the history of Tamla Motown, the legendary Legend venue in Manchester, important northern '70s DJ Roger Eagle, and Prince's 'I Wanna Be Your Lover'...

The most comprehensive review section in the world

Our hotshot team of expert genre reviewers guide you through all the new releases that you need in your life.

The UK's answer to ADE, we preview BMC in the run-up to the event in the south coast of England at the end of April.

These are this week's vital Bandcamp releases (27th March)

Blackest Ever Black shuts down with final label compilation